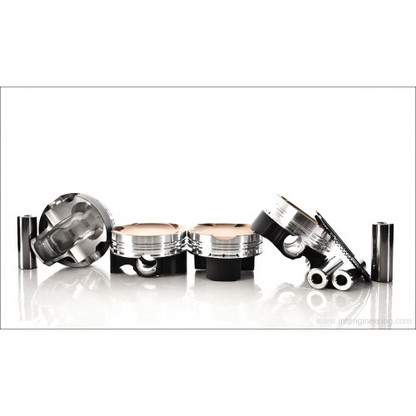 This is a set of custom made JE FSR pistons made to Integrated Engineering specifications and are used in all of our high HP race cars. These pistons use JE??s state of the art FSR forging, which reduced mass and wear caused by friction, without sacrificing strength. The FSR forging uses an asymmetrical skirt instead of the traditional full-round skirt which reduces weight significantly. This design requires oil squirter modification or removal for clearance. Included with with tool steel wrist pins, ceramic dome coating, and JE's Tuff-Skirt anti friction skirt coating. They also feature oil ring rail support, which allows the piston rings to be moved further down on the piston. Lateral gas ports also come standard to build up pressure behind the compression ring and seal it against the cylinder wall. These are made to be used with the FSI (92.8MM stroke) crankshaft. This will increase displacement to 2008cc. This increased displacement yields more power on the same boost, less chance of detonation at a given power level (Lower peak cylinder pressures) and faster spoolup.

JE are a great upgrade for someone looking to build a stout race engine. They have 20mm wrist pins so they will require a set of rods with 20mm pins to match. They feature JE's 2618 alloy which is stronger then most other pistons made from 4032, and are specifically engineered for extreme applications. Dish requires no deburring or preparation.