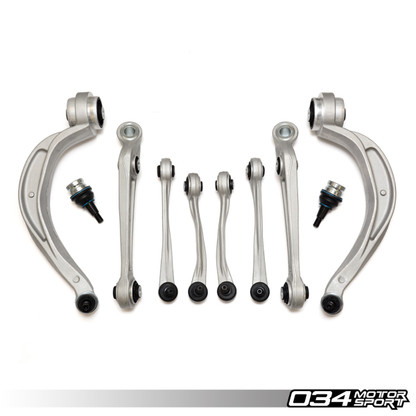 The factory front control arms are an integral part of the B8/B8.5 Audi A4/S4 & A5/S5/RS5 suspension, but can start wearing out as early as 40,000 miles - especially on enthusiast-owned vehicles which are driven hard on the street or track. As the rubber bushings degrade and ball joints develop play, alignment is compromised and steering becomes less precise.

Installation Note: It is imperative that the suspension be compressed to static ride height before any suspension pivot bushings are tightened, as per the factory installation procedure. If this is not done, the bushings will tear prematurely as the twisting forces on them will be much higher than is intended. 034Motorsport's Limited Warranty on Density Line products does not cover premature failure due to improper installation or use. We highly recommend professional installation for this product.