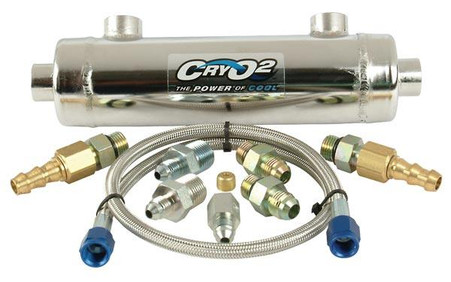 Design Engineering's next generation method of chilling the temperature of fuel before entering the intake stream - the CryO?ÌÎ_ Fuel Chiller System!

The new CryO?ÌÎ_ Fuel Chiller System uses the cryogenic properties of liquid CO?ÌÎ_ to charge a series of internal cryogenic chambers surrounding the center "fuel" chamber. As the fuel passes through the center chamber, the cryogenic-charged chambers super cool the fuel by maximizing the thermal transfer process removing heat four times more effectively than any other system available today.

As the temperature of fuel is reduced it increases in density. The denser fuel results in better and more efficient burning of the fuel - consequently generating more power and greater fuel efficiency.

Under hood heat created by high pressure fuel pumps, headers, exhaust manifolds and other heat generating components all combine to raise the temperature of fuel and creates a potentially lean condition or ??vapor lock?? that can damage the engine.

The CryO?ÌÎ_ Fuel Chiller System can be used along with your existing CryO?ÌÎ_ system, or a nitrous oxide system, to lower fuel temperatures and improve HP and efficiency and reduce the chances of engine damage.

Each CryO?ÌÎ_ Fuel Chiller System comes complete with two (2) -4AN and -6AN fittings as well as two (2) 3/8?? barb fittings and mounting brackets and hardware. Also in the kit is a 2-foot length stainless steel braided hose for use with -4AN fittings to allow a connection to other components such as a CryO2 Air Intake or CryO2 Intercooler Sprayer.