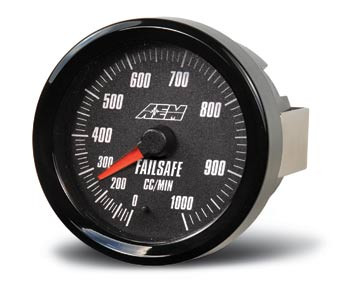 AEM??s Water/Methanol FAILSAFE Device is the most advanced water/methanol failsafe device on the market. It actively monitors the injection system??s ENTIRE flow curve to compensate for failure under ANY condition, allowing you to use your water/methanol system with complete peace of mind. If you have a water/methanol injection system or are considering one, you will not find a more advanced failsafe device on the market than the AEM Water/Methanol FAILSAFE Device.

AEM??s Water/Methanol FAILSAFE Device actively monitors the entire flow curve independent of pressure, continuously collecting flow vs. injection rate data so that any deviation from your established flow curve will trigger an alarm output that can be used to reduce boost or timing, change maps, add fuel, trigger a two-step or perform practically any action you choose to save your engine. It is PC programmable (with USB connectivity) which eliminates the guesswork when setting min/max threshold parameters. It features PC-based software and an auto-scaling flow map that simplifies set up, and has an ??Auto Set?? feature that will create a baseline configuration.